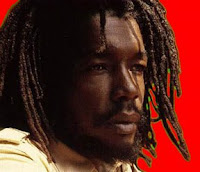 Peter Tosh (October 19, 1944 – September 11, 1987) was the guitarist in the original Wailing Wailers, a pioneer reggae musician, and a trailblazer for the Rastafari movement. Born Winston Hubert McIntosh, Peter grew up in the Kingston, Jamaica slum of Trenchtown.

His short-fuse temper and unveiled sarcasm usually kept him in trouble, earning him the nickname Stepping Razor after a song written by Joe Higgs, an early mentor. He began to sing and learn guitar at a young age, inspired by the American stations he could pick up on his radio.

After an illustrious career with the Wailers and as a solo musician, his life was cut short when he was brutally murdered at his home. Though robbery was officially said to be the motivation behind Tosh's death, many believe that there were ulterior motives to the killing, citing that nothing was taken from the house.
[source]
No comments:

Moved to a then, racially segregated St. Louis at the age of eight (1956/57). Lived there for five years and enjoyed music, dance, art, literature, and opera. Was even bussed to a German-American school where she suffered blatant racism as a part of the Brown versus Board of Education decision.

As a part of a rich intellectual family, she was an avid reader of great authors to include Jean Genet, Herman Melville, and Langston Hughes. She also came in contact with great musicians and singers like Dizzy Gillespie, Chuck Berry, Charlie Parker, Miles Davis, and Josephine Baker, all friends of her parents. W.E.B. DuBois was also a family visitor.

Returned to New Jersey at age thirteen (1961/62) where she completed high school and became increasingly aware of the inequities of the American society on black females."

Ntozake Shange was born on 18 October 1948. Happy birthday to her.

Ntozake is isiZulu for "her own things," suggesting "she who brings her own things," when it is someone's name. By comparison, in Sesotho, my mother tongue, it is "Nthotsaka," which naturally sounds like its isiZulu counterpart.

with no immediate cause