I was fifteen, but I remember the events of 16 June 1976 like it was last week. Black kids rose against the Apartheid state in South Africa, and refused Afrikaans as a medium of instruction in schools. They stamped their collective foot and said "No!" And their cry shook the world. Police opened fire and the first kid to go down was Hector Pieterson. I know you've seen the now famous picture of his limp body in the hands of Mbuyisa Makhubo, his sister running alongside them.

"I saw that he was bad, but I thought that he was just wounded, you know," remembers Hector's sister, Antoinette Sithole. [source]

There were to be many victims that day. Hector's photo was plastered on the conscience of the world (though few did anything about it), but there weren't enough photographers to shoot take pictures of the other victims. Hastings Ndlovu was another such victim, and it is said he may have even died before Hector. Here's the story of his death.

Klein was dumbstruck as to how a school child, in the middle of the morning, was being admitted to Chris Hani Baragwanath Hospital with gunshot wounds, and questions raced through his mind.

"Children with bullet wounds?" he wondered. "But how? And by whom? A robbery? By school kids? In the middle of the day? Where would the guns come from? Black South Africans are prohibited from owning guns."

The answer came: "They were shot by the police."

Klein says a quick survey in the casualty ward revealed that all except one child were shot above the waist: in other words, the police had shot to kill. Then his old high school friend and a neurosurgeon, Dr Risik Gopal, arrived and checked Hastings' condition.

Gopal confirmed what Klein had suspected: no one could survive such an injury. And indeed, a "short time later, Hastings was dead", having been in a coma from the moment he was shot, Klein says.

Klein worked in Chris Hani Baragwanath Hospital for several years, and had been warned that it would be a "baptism in blood" - particularly on Friday nights. But after years of handling "grisly injuries" from assaults using a range of weapons, he thought "nothing could penetrate the emotional barriers I had learned to erect".

The sight of "uniformed children riddled with bullets", accompanied by their "terminal breaths", left Klein feeling helpless and hopeless, and he could only watch in despair as life ebbed from the "fragile frame" of Ndlovu.

The white hospital administrator walked into the ward and Klein told him to expect trouble that night in Soweto. The administrator replied: "Oh, no, by tonight everything will have blown over."

Klein, a coloured doctor who under apartheid ethos had no authority to shout at a white person, couldn't contain himself. He yelled: "In Soweto, you do not shoot children and get away with it. There is going to be shit!" He walked away with tears in his eyes.

Klein had to break the news of Ndlovu's death to the boy's friends and relatives, a difficult task not made easier by repeating the news to other relatives of dead children. "I remember the looks of disbelief, the anguish, the tears. And I remember my own grief welling up afresh each time I delivered the grim news."

Gopal, now the chief neurosurgeon at the hospital, said they stood at the window and watched police shooting children. Some of the staff members saw their own children being brought in with gunshot wounds. "There was a lot of emotion on the day. It was just chaos," he says.

By late afternoon the government had prohibited blacks from assembling in groups larger than three. Workers, when they disembarked from trains and taxis, got together before walking home, wondering what was happening, unaware of the ruling.

Police opened fire on them, expecting them to know about the prohibition, and they arrived at hospital asking innocently why the police were shooting at them.

Others arrived at hospital with strange wounds, says Klein: small entrance holes in their upper bodies, with larger exit wounds lower down. One man said: "We were sitting in our kitchen, having dinner, when bullets came in through the roof and hit us." Police were firing from helicopters overhead. [source]

The purpose of this post is of course to remember these children's sacrifice. I remember the personal friends I made after refugees started flowing into Lesotho from all over South Africa. I remember how we would gather round and sing freedom songs in the evenings, how knowing them made us better politicians at that young age (I was fifteen). I remember how we'd listen to Radio Freedom being broadcast from Tanzania by the African National Congress. I remember how the sound sucked because the Apartheid government was doing its best to kill the signal.

The other purpose of this post is to warn us about being inactive in the face of grave injustices. After 1976 and what it brought to South Africa, you'd think the world would do something. You'd be wrong. You think the world might do something for Darfur today? Wrong again. Mention a calamity in the world and ask yourself if the world might intervene, and you'd be wrong to think it might. But America did intervene in Iraq (not in Darfur). Find the error. Did America intervene in South Africa with
So, how did the world react? How did the big Occidental powers react? This is part of what happened: "[Chester] Crocker attracted the attention of the Reagan transition team with an article he wrote in the winter 1980/81 edition of the Foreign Affairs journal. In the article, Crocker was highly critical of the outgoing Carter administration for its apparent hostility to the white minority government in South Africa, by acquiescing in the United Nations Security Council's imposition of a mandatory arms embargo (UNSCR 418/77) and the UN's demand for the end of South Africa's illegal occupation of Namibia (UNSCR 435/78). [source]" That's what happened. The Reagan administration went on to apply and implement its policy of Constructive Engagement. 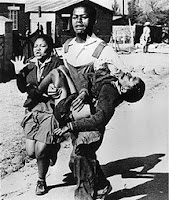 Dear Rethabile,
I was 18 and I remember that day. We, in Jamaica, have always paid close attention to the happenings in Zimbabwe, Tanzania, Ethiopia, South Africa, Nigeria and Ghana, so on day fateful day, I remember a lot of Rastafari brethren being outraged and helpless.
There was a lot of chanting and drumming in the tenenments that night.

Yes, and Bob even did that wonderful song with the appropriate name. Nobody knew at the time that Mugabe would rot. I'm sure Bob's turning in his grave just thinking about it.

In NZ in 1980 we had what is now known as The Protests when the Boks came to play rugby. The protests split our nation, and is still remembered as an historical event. Most Kiwis said No we will not condone apartheid by supporting a white South African rugby team. It was a stunning show in support of anti-apartheid forces. (One striking image is of an aeroplane flying over a rugby ground and flour-bombing the rugby players.)
June 16th 1976 is a horrific reminder of what hatred and blind ignorance is capable of.

What an important memory to give loud voice too ... my government is not representing the voice of the people or our congress and it is an injustice what America is doing now and has done in the past with ill-conceived policies and cowardices. Peace, JP

Chiefbiscuit,
Flour-bombing! Who'd have of that! It's nice because it's spectacular, efficient, and "non-violent" all at once.

Jane Poe,
Cheers. I think there are a few other considerations that go into policy-making than human rights, human dignity and human freedom. Lots of lip service.

I have talked to people from SA and neighboring countries who describe it as a power keg right now.

I've always wondered if forgiveness is even right.

ren.kat,
Power keg is the right definition, I suppose. Personally I've always marvelled at the fact that there has not been a bloodbath in SA, following the end of Apartheid.

'there has not been a bloodbath' - but there is one Rethabile.

There's a blood bath? Where?

I don't remember that day, I was nine, but I do remember hearing of it subsequently. South Africa, what shame we, white people, carry for that country......the British, the Dutch....to shoot children and all the rest.....and you are right, I do not do enough, nowhere near enough, but one thing I do do is bring my kids up properly, we have black friends (my best female friend is from Ghana, living in UK now), British Indian friends, Chinese friends, they do not mention colour or consider it. This makes me happy......small steps, but important ones. But Christ what a legacy those greedy white people left around the globe....but when oil's to be had, you can be sure we'll be there with our guns, sticking our ore in. UGH. Sorry.

sorry, ununderstandable comment, I meant my kids don't think of colour.....everyone is the same to them. Later I will educate them about the issues, for sure, for now I'm happy they are egalitarian.....

I have dull memories of being shaken in my teenage years wondering what was happening. I didn't understand it. It was incomprehensible.

I'm ashamed to say I still don't, dull in my middle years, worried about silly things that mean nothing against this stain.

Deb,
I have many friends in other parts of the world who don't, either. I think the world is progressively becoming one. Kick me for saying that, but I think it.

Can it be said better than that? I don't know.

A powerful and deeply moving post, Rethabile. In June 1976 I was 21, and I remember news of the Soweto events as they were taking place. It was the events in Soweto at that time, more than anything else, that spurred the emergence of an active movement or movements in the United States in opposition to the apartheid system, and opposing the U.S. government's support of apartheid. I specifically remember political demonstrations at the University of Minnesota, where I was a student, to try to force the University to divest its funding from corporations with investments in South Africa.

I've linked to your post in my blog. Thanks for posting this.

Thank you for this most important post. I was a kid during this time, but the thing I find most telling is that what I learned I had to look up for myself by reading books. Not once did my US high school cover it in class. I'm not saying my teachers were evil people. But when "good" people put their head in the sand, they contribute to the evil.

Julie, Thank you for reading and listening. That rocks.